A Walk In The Park: The Hundred Years Of Uplands 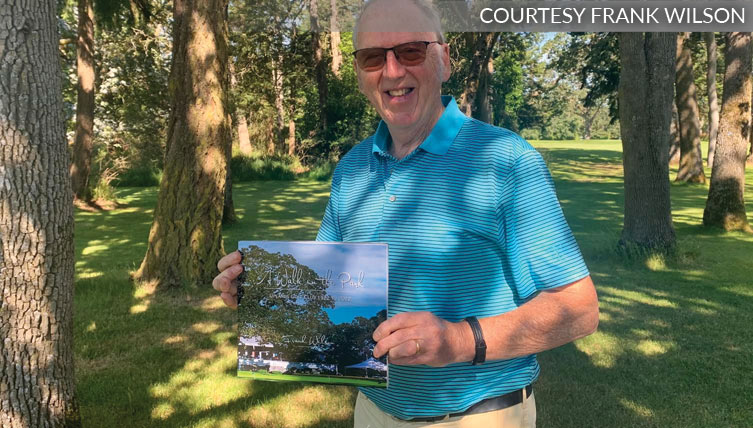 As Uplands Golf Club celebrates their 100th anniversary, member Frank Wilson has chronicled its past century in an amazing book.
Doing a Golf Club justice in a centenary book is always a challenge.
Frank Wilson (shown above), in a beautifully crafted retrospective, has not only managed to bring Uplands' history vividly to life but also highlight some of the current longer-term members. A great mix of historical and natural images provide even more texture and detail.
Wilson has graciously worked with the Editors for British Columbia Golf to produce an article that excerpts his impressive literary effort...
THE 100 YEAR HISTORY OF UPLANDS
(a very summarized version of "A Walk in the Park – Uplands Golf Club 1922-2022”. )
THE EARLY COURSE HISTORY

The Club had its earliest iteration on military lands close to Macaulay Point in Esquimalt when the Royal Marine Artillery arrived in 1893. Two of the Artillery's senior officers were enthusiastic golfers and with their leadership, construction of some golf holes began. Soon, the United Service Golf Club (later to be re-named United Services Club) was in active play albeit at times interrupted by wandering cattle and sheep. 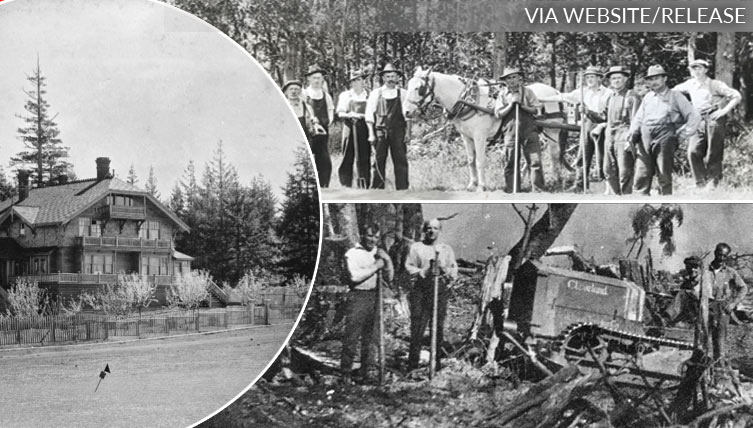 Left: The original Macaulay Point Clubhouse • Right: Early clearing and construction at the current location
Eventually, influential Club members began to look elsewhere in the hope of finding a location for a full eighteen hole course. Land on the former Uplands Farm became available when a proposal by the Oak Bay Council to create a municipal facility did not receive sufficient public support. The land (120.75 acres) was then leased from the Hudson Bay Company for 15 years at $3000 per annum.
Construction soon followed and the first ball was struck from the first tee at the renamed Uplands Golf Club on a bright and sunny July 1st, 1922. The Club was officially opened on Labour Day of the same year when the construction of the clubhouse was almost complete.
Today, it is not easy to imagine the less urban, even agricultural nature of large parts of Victoria at that time. There were no traffic lights adjacent to the 18th tee box. The city's population was less than 60,000. This was a a course carved out of Hudson Bay Company grazing land just four years after the Great War. A new golf club on the Western edge of a country only sixty-five years into nationhood.
Until automobiles became common, many members travelled to the club by bicycle. Those who used the No 9 street car to the terminus, then walked up through the fields to the Club. Only a picket fence defined the North, East and South sides of the property, a feature that was to remain for years to come.
Still, the Club was opening against the backdrop of the roaring twenties. Many international golfing celebrities would visit Victoria and play Uplands over the next decade... Walter Hagen came in 1926, followed only a few years later by Archie Compston and Aubrey Boomer.

Walter Hagen (left) show with then Club President S. J. Halls in 1926
A STEADILY MATURING LAYOUT
After dealing with the financial issues of the Great Depression and the war-time years, the Club was able to move from tenancy into full ownership of its lands in 1947.
The mid 1950’s saw the beginning of significant course alteration and development. Tees and greens were improved as was access to irrigation water. The most significant change came in 1969 when four of the last six holes were substantially changed to add more length and complexity. Later more bunkers were added and two attractive water features were developed close to the 13th, 14th and 15th fairways. 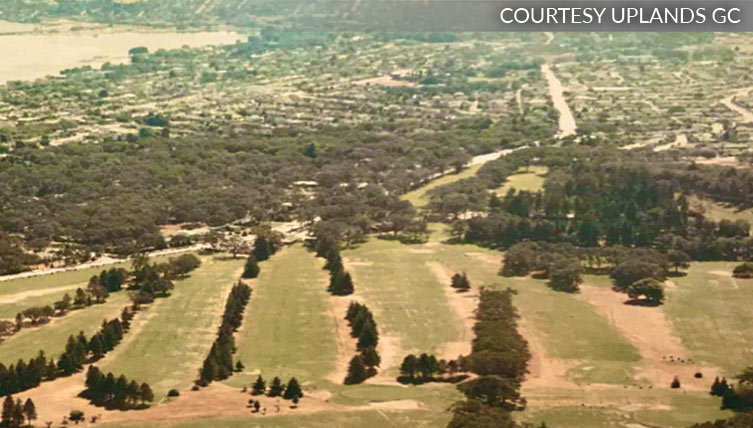 The members of Uplands have long had a love affair with the trees on the course.
Records show that the Club was buying trees as far back as 1932 when more than 1100 primarily native trees were bought in just a two-month period. More were added over the years with most of the exotic (non-native) species being introduced onto the course from 1965 onward. A 2009 survey found more than 2000 trees total across the property of which almost 82% were native species... with the vast majority being Garry Oaks. 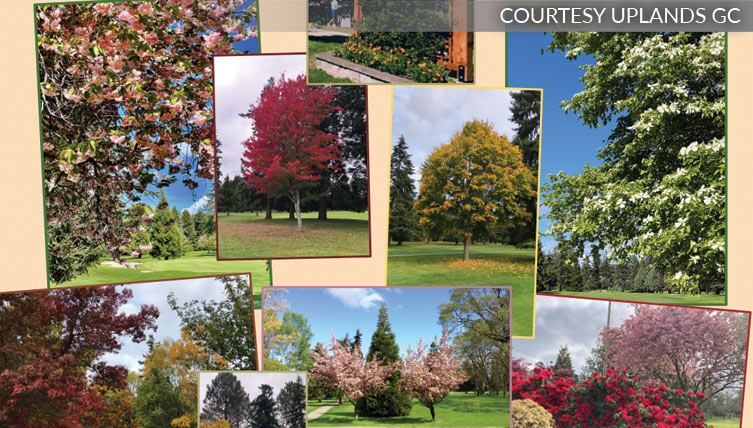 While there are more than 30 different tree species on-site, since the early 80's there has been a clear policy of concentrating new plantings on native trees or those that have proved to be well-adapted to local conditions, thereby fully maintaining the predominance of the Garry Oak/ Douglas Fir treescape which makes the course unique.
Today almost one-third of the total course is made up of forested area and associated open and naturalized land.
THE COMMITMENT TO WILDLIFE & THEIR HABITAT
The Uplands course provides a sanctuary for many species of animals and that is no accident.
In the late 1990’s, the Club decided that the course should become a Certified Audubon Cooperative Sanctuary. The goal of this program is to promote the use of environmentally responsible maintenance practices in day-to-day operations to enhance conditions for wildlife. Achieving certification required the club to meet stringent criteria. Under the leadership of Master Superintendent Brian Youell, the Club became a Certified Cooperative Sanctuary in 2011. Today, the site is home to many birds and mammals.There has been an ongoing initiative to record all the different birds that appear on or over the golf course. The 100-bird mark was reached, in part, through casual observations by members and staff in the past decade or so. This large number has been aided by the provision of bird boxes and nesting platforms and natural maintenance of the vegetation adjacent to the water features. 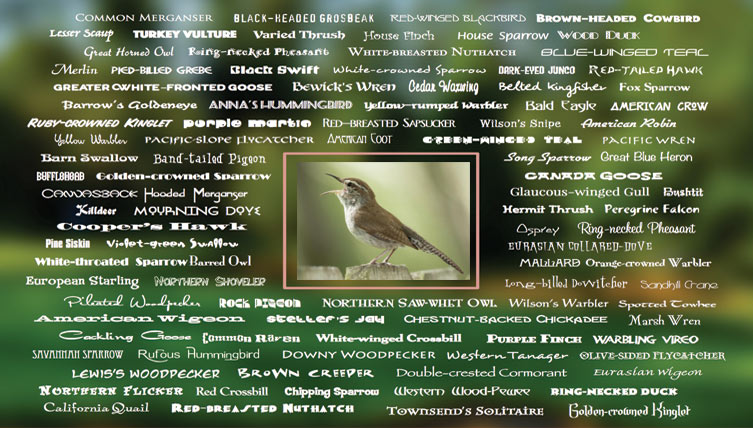 The centenary book includes a page that list all 100+ birds seen on the course... each in different font that matches with that particular species
THE "A FEW OVER PAR" PROFILES
Uplands is often noted as being “a course to be played for life" and currently approximately half of the active male members and one-third of the women are of an age greater than the par of the course (70). This allowed Wilson to conduct interviews with some of the members who are of an age that qualifies them to be regarded as “a few over par.” Their recollections provide a connection that can stretch back almost to the start of the Club. The two who have been members longest are Robert Craven (Below Left) and Maureen Hibberson (Below Right). 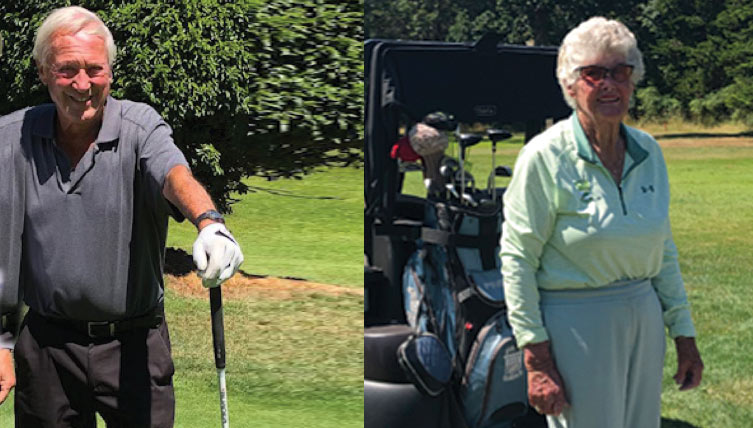 Robert (Bob) Craven has the longest experience as a member of the Club having joined in 1950 at 21 years of age. As such, he is a link with the Club's first Head Professional, Walter Gravlin. His description of Walter Gravlin’s pro-shop looking “like an untidy garage” is just one example of the living history that is held in the memories of members who have been teeing off at Uplands for a long time.
Another long-time member is Maureen Hibberson who has been a member for more than 60 years. Her first Uplands golf memory was that reserved tee times did not exist. As she puts it ... “Golfers put a ball into a tube at the first tee and when it dropped out it was tee-off time.” Dogs were allowed in the evenings but not on greens or in bunkers. In her early years women had restricted tee times and amongst other limitations (including some relating mainly to access to the bar) were not permitted to wear long pants while golfing, except in the winter.
THE STAFF
The family-nature of Uplands has been greatly enhanced by staff quality and continuity.
Over the century there have been only four club professionals: Walter Gravlin (who had begun at Macaulay Point in 1919) Johnny Wren, Don Billsborough and the current Ian Stone. 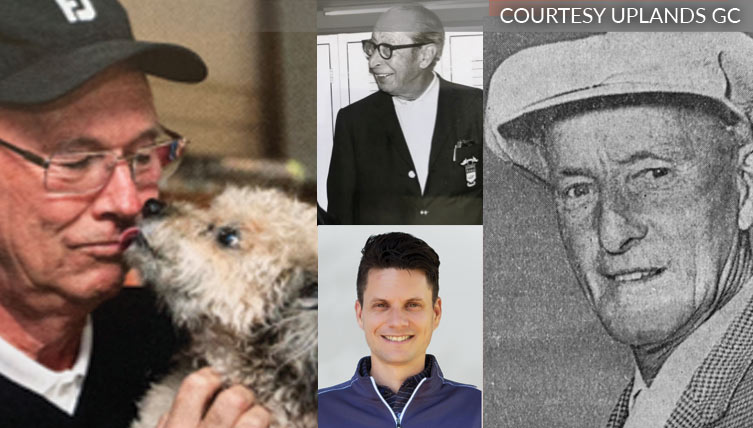 Shown clockwise from left: Don Billsborough, Johnny Wren, Walter Gravlin and Ian Stone
The Master Grounds Superintendent, Brian Youell, joined the club in 1981 and succeeded ex-hockey player Bill Shvetz (who was appointed in 1971) as top man in 1994. Brian’s right hand man for almost forty years has been his brother Dennis. Many members of the grounds crew have worked a great proportion of their working lives at the Club and the same has applied to a number of the clubhouse food and beverage staff. 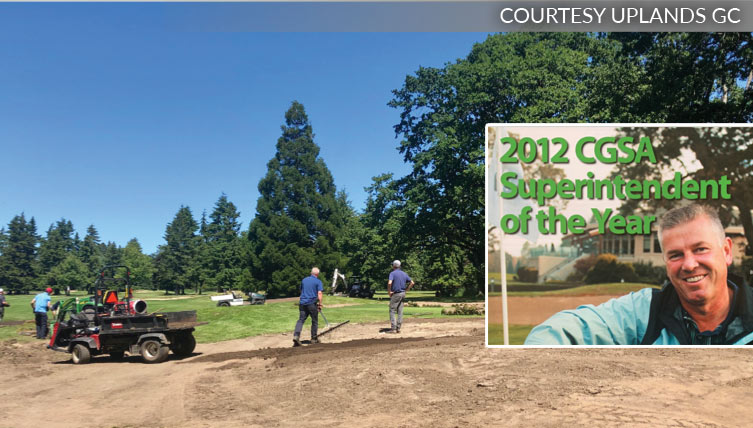 Brian Youell and staff making renovations to the 8th hole
A HOST & HOME TO BOTH CHAMPIONS & CHAMPIONSHIPS
Uplands has played host to many major tournaments - and players - over the years. At the 1969 Carling Cup BC Open, Uplands own Bill Wakeham edged out the great Moe Norman. In 1984, the 1982 Masters Champion Craig Stadler would blast his way to a 62 on a course he had not even seen before. 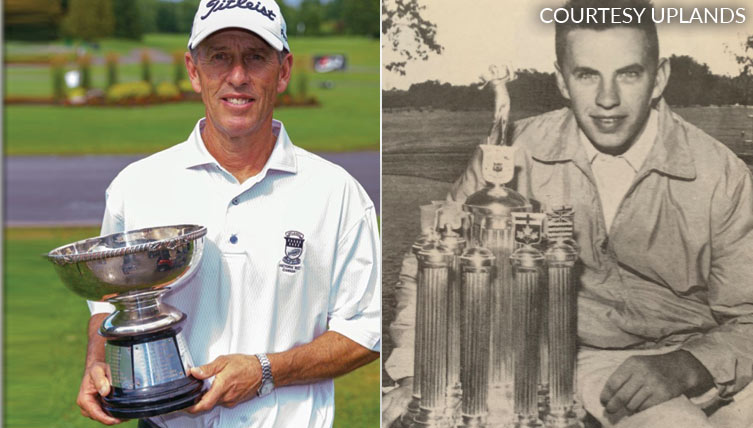 Jim Rutledge (Left) and Bill Wakeham (Right) both grew up playing Uplands' fairways
Local Jim Rutledge formulated an illustrious professional career honing his game as a boy on the parkland fairways and challenging greens of his home club. A number of other Uplands members have gone on to bring honour to the Club alongside personal success. These include Joan Lawson, Diane Phillips Rands and Megan Woodland, demonstrating that girls and women have always featured significantly in the overall active membership.
More recently, Uplands has become the Vancouver Island home for the PGA Tour Canada. The Tour has come to Uplands twenty times. Many who met the challenge of Uplands have gone on to play on the Korn Ferry and PGA tours. 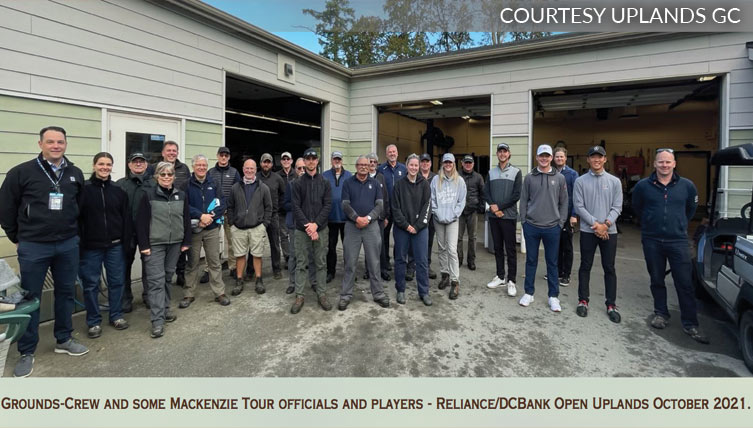 UPLANDS' ENDURING FAMILY NATURE
The one hundred years of Uplands Golf Club can be seen as a social history over a period of great change but the continuity has been the members.
In particular it is about those who built a club and fostered its friendly Uplands family style over time. Traditions made and continued, challenges accepted and met. Many friendships developed and many, many rounds of the old game played.
Over all the eventful years of much change on and off the course, Uplands has provided “walk in the park” enjoyment for thousands of members. Good fellowship in a beautiful environment with a welcoming clubhouse does not always make that missed putt or errant drive hiding behind a tree more palatable - but it does help. 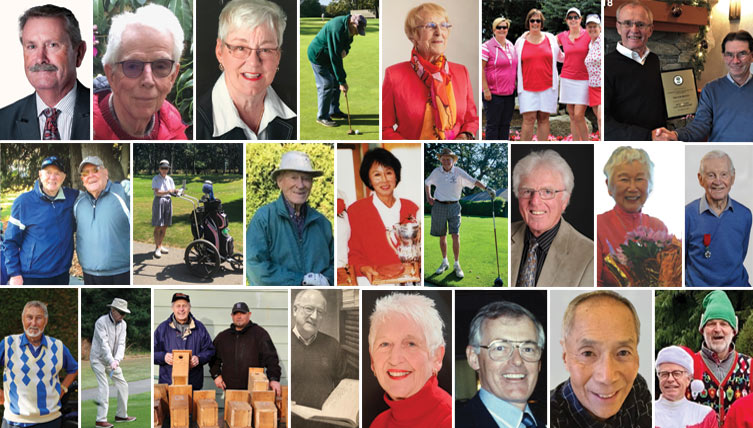 The elements that comprise this article are condensed from Uplands' centenary book – “A Walk in the Park – Uplands Golf Club 1922-2022” authored by Frank Wilson. The 150 page book, published by Tusitala Victoria, is designed by Phil Robbie. Lavishly illustrated, it includes many commissioned photographs from Leo Mah. Authorship was a gift to the Club. It is available from Uplands Pro-Shop or (for a signed copy) from the author via his website frankwilson.ca