Zibrik Wins 2022 PGA Of BC Women's Championship In Victoria 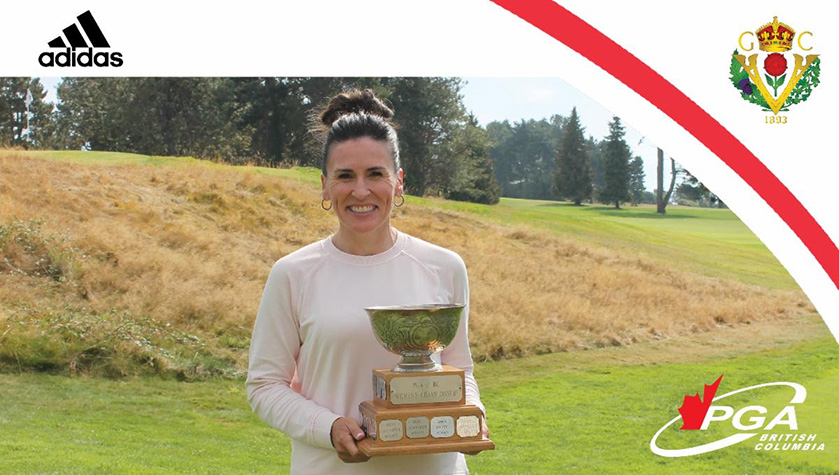 SEPTEMBER 29, 2022 - VICTORIA, BC (PGA of British Columbia) – Shaughnessy Golf & Country Club Head Professional Ashley Zibrik played a near flawless final round on her way to capturing her third title at the 2022 PGA of BC Women’s Championship presented by adidas Golf at Victoria Golf Club on Wednesday...

Zibrik began the final round in third place, just three points back of defending champion Kattereya Kennedy (Simon Fraser University) and two back of Christine Wong (University Golf Club). But birdies on the opening 1st and then the difficult Par 4 7th hole quickly made up ground for her to catch the leaders. From there, Zibrik did not look back.

The Women’s championship uses the Stableford format - a points-based system in which players earn points equivalent to gross scores on each hole. A single point for bogey, two points for a par, three points for a birdie and so on.

Zibrik made the turn on Wednesday’s final round with a one-point lead over Wong. Kennedy closed the gap with a birdie on the 10th but birdies by Zibrik on the 11th and 13th holes helped her pull away from the field through the middle stretch on the back nine. She added her fifth and final birdie of the day on the 17th hole to solidify the victory, eventually winning by four points. Her 39-point effort on Wednesday was equivalent to a gross 3-under par 69 and in addition to her 34 point total on Tuesday, finished the event at 73 points.

“It was one of those rounds where I didn’t even know where I was or what I shot until the end. I was in the zone all day and didn’t want to distract myself by looking at the leaderboard,” said Zibrik.

"Kat and Christine are a lot of fun to play with. They hit it a lot farther than me so I knew I had to play my own game all day. It wasn’t until the birdie on 17 where I thought I might have taken the lead."

It’s been a good couple of weeks for the 38-year old. She is fresh off a solid finish at last week’s PGA of BC Club Professional Championship at Fairview Mountain Golf Club where she tied for sixth place in a field of 45 players where she was the only female competitor. Additionally, on Tuesday, she was named the Lower Mainland recipient of the Dick Munn Golf Professional of the Year Award as the top Head Professional in the region.

“It’s been really busy lately. I hadn’t been playing much but on Wednesday prior to the Club Professional Championship, I had a lesson with Tim Wilson and I just started hitting it so well. The award is such an honour - it’s been a great couple of weeks”.

Wong, the 2020 champion and 2021 PGA of Canada Brooke Henderson female player of the year, earned 69 Stableford points and collects $700 for her runner-up finish.

Kennedy struggled on the difficult closing holes at Victoria Golf Club but some solid play early in the event helped propel her to a third-place finish at 64 points. She earned $425.

All participants were thrilled with the chance to play the historic Victoria Golf Club in its tremendous condition. The PGA of BC would like to thank host Executive Professional Richard Ingle, Head Professional Lindsay Bernakevitch, Superintendent Paul Robertson, and the entire team of staff at the club for their outstanding hospitality and assistance in making the tournament a great success.

Additionally, the Association would like to extend a special gratitude to Victoria Golf Club Women's Captain Catherine Mann, Women's Program Coordinator Anna Mooney, and the entire membership for the opportunity for this event to take part in conjunction with the 20th annual Barb Doell Pro-Am.

The Association also extends its appreciation to presenting sponsor adidas Golf for their generous support of this event, as well as Sales Representative Bob Jackson for his on-site presence at this championship.

CLICK HERE to view complete results and payouts from 2022 PGA of BC Women’s Championship presented by adidas Golf at Victoria Golf Club.