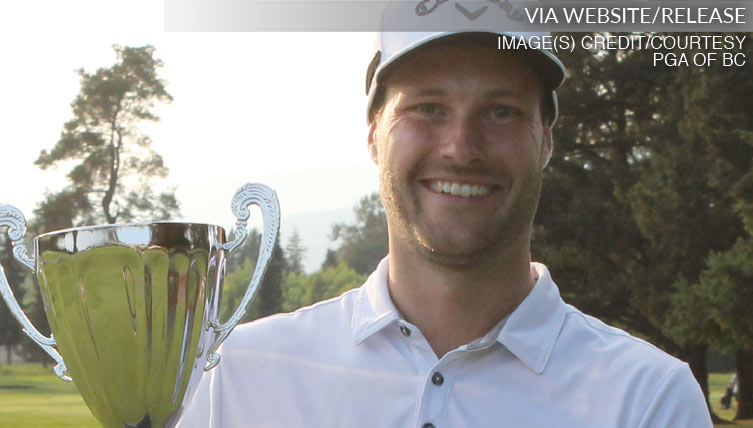 Victoria native Nate Ollis fired back-to-back rounds of 2-under par 70 to capture the 2022 PGA of BC Championship presented by Axis Insurance...

However, Ollis' win in late August at the Pitt Meadows Golf Club did not come easily. After the completion of 36-holes, he and Seymour Creek Golf Centre’s Bryn Parry (69-71) found themselves tied at 4-under par and heading to a sudden-death playoff.

It would take three holes and two birdies to take the title, the $6,300 winner’s cheque and see his name etched on the William Thompson trophy alongside some of BC's greatest golfers.

Although it's his first provincial championship win, Ollis has been knocking on the door for the past couple of years and has been extremely close on a few occasions. At the 2021 PGA of BC Championship held at Rivershore Golf Links, he narrowly missed a putt on the 36th hole to force a playoff, which ultimately gave Jake Scarrow (Gorge Vale Golf Club) the title.

“It feels like it’s been forever, even though it hasn’t been” said the 29-year-old. “I keep giving myself chances and knew eventually something great was going to happen. And sure enough, today happened to be my day. It means a lot to finally win a PGA of BC title”.

Pitt Meadows Golf Club was hosting its first PGA of BC Championship event in 30-years and once again served up an exciting finish. The PGA of BC thanks Head Professional Wes Doka, Superintendent Ryan Brooks, General Manager Nick Droulis, and the entire team of staff and 30+ volunteers from the club’s membership for their outstanding hospitality in hosting the event.The $35,000 championship purse was split amongst the top 50 players in a field that consisted of 99 golf professionals from all over BC. 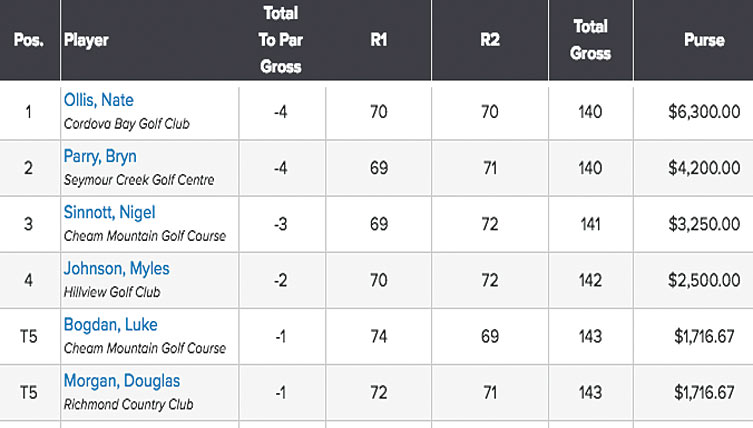 2022 has been a banner year for Ollis, especially as of late on the Vancouver Island Club Professional Tour. After a fourth-place finish in the season-opening event at Highland Pacific Golf, he has since rattled-off four straight victories dating back to April. He hopes the streak continues heading into the Tour championship in the coming weeks.

Parry earns $4,200 for runner-up. A win for him would have set a new modern-era record with his fifth PGA of BC Championship, a title he currently shares with Scott Minni (Life Professional). His last victory came in 2019 when this event was held at Whistler Golf Club. His other three championships came in 2000, 2008, and 2015.

CLICK HERE to view complete results and payouts from the 2022 PGA of BC Championship presented by Axis Insurance at Pitt Meadows Golf Club.