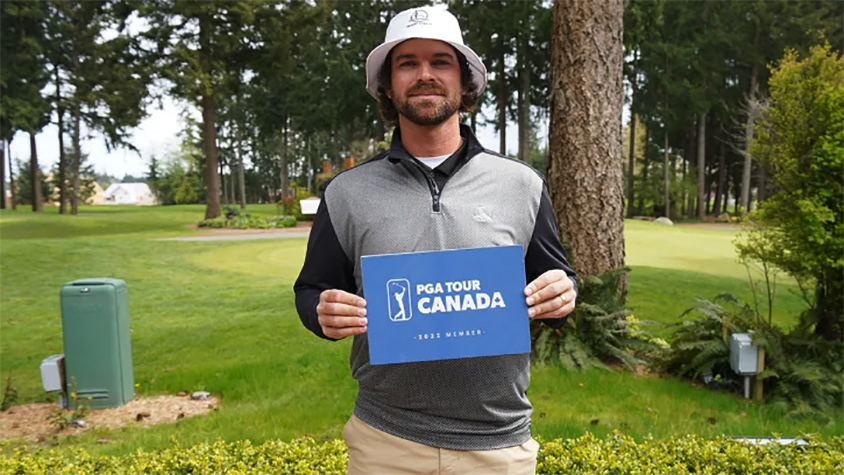 Riley Wheeldon will tell you it was a lot more than home course advantage that propelled him to his impressive performance at the PGA TOUR Canada qualifying school at Crown Isle Golf Resort.

Sure, his intimate familiarity with the Crown Isle layout that is located not far from his childhood home in Comox came in handy, but Wheeldon credits an attitude adjustment with his solid play.

“My game has always been there,” Wheeldon said. “My attitude hasn’t. That was one thing I said to myself last summer, that if I was going to keep doing this, my attitude has to change. Having a little refresh this winter, I was able to come out and focus on attitude and let everything else fall into place and behold, this game is pretty fun.”

The former B.C. Junior champion ran away from the rest of the field as he posted a 72-hole score of 20-under par to win by five shots. The win makes Wheeldon fully exempt for the upcoming PGA TOUR Canada season and may force the 31-year-old to make some tough decisions. He has a job at Desert Forest Golf Club in Carefree, Ariz.

“Coming into this week, I wasn’t planning on playing a full schedule,” Wheeldon said. “I was going to see how this went. I saw a lot of good things this week and was able to get full status. We’ll see. I’ll have to have a couple of conversations with my bosses, the first boss being my wife, and then the bosses at the club where I’ve been working.”

The Crown Isle Q-school added some much-needed Canadian content to this season’s PGA TOUR Canada schedule. All but one of the nine players who earned status in Courtenay are Canadians and the one who isn’t — second-place finisher Yi Cao of China — resides full-time in Delta.

Rounding out the top nine were Jimmy Jones, a dual citizen who is the son of the late Dawn Coe-Jones, Austin Ryan of Waterloo, Ont., and Marc Bourgeois of Cheticamp, N.B. The players finishing second through ninth are exempt through the first reshuffle, likely the first six events of the season.

Players finishing 10th through 30th at Crown Isle received conditional status. Jeevan Sihota, an 18-year-old from Victoria, finished tied for ninth but lost in a three-man playoff for that last exempt spot. Sihota will have good conditional status, however, and should draw into some events. Sihota, who now plans to turn pro, already has an exemption into the season-opening Royal Beach Victoria Open presented by Times Colonist, which goes June 2-5 at Uplands Golf Club in Victoria.

Other British Columbians earning conditional status by finishing 10th through 30th at Crown Isle include Zach Anderson of Nanaimo (T15), Bryce Barker of Vernon, and Trevor Yu of Vancouver (both T19).

How the Tournament Worked

There were 95 players starting the week, with 92 completing all 72 holes. Below is a breakdown of the various PGA TOUR Canada membership statuses earned this week.

Here is the rundown on the amateurs: